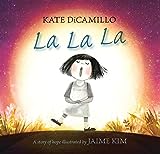 The only word in this glorious book is ‘La’, which is sung, shouted, hollered, joyously crooned, imploringly called and finally sung back to the little girl protagonist of the otherwise wordless narrative.  It begins with the spotlighted child standing alone and singing a single ‘La”, which she then follows with several more. There’s no response so she stomps off outside and addressing the falling leaves, sings to those too, and in fact to the whole tree, rather more forcibly. Silence. She then directs lots more ‘La’s to the pond and surrounding foliage: still she receives nothing in return.

Sadly she walks back indoors, sits down and thinks. Later she sets out once more beneath a gorgeous purple, starry sky and begins sending a volley of ‘La’s towards the moon. A deadly hush prevails. Back goes the girl, returning with a ladder up which she begins to climb.  So eager is she for a response from the moon that she keeps on climbing until she reaches the top and then ‘La La La La La’, she sings.

Seemingly the moon hasn’t heard her song, so she returns home and, worn out by her efforts, drops off to sleep on the floor. Suddenly she’s woken by a sound coming from outside. Could it be the moon perhaps? It is, and off out she goes where a dazzling duet takes place beneath the stars.

This superb dramatic sequence unfolds as a slowly building ode to hope, determination and friendship, thanks to a duet between author and illustrator that is as felicitous as that between the girl and the moon.

Run, Elephant, Run Witch for a Week
Scroll to top