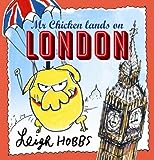 Leigh Hobbs specialises in creating outsiders. Their exteriors may be strange, even rather alarming, but it only takes a moment in the company of Old Tom, Horrible Harriet or Mr Chicken to see beneath their outward appearance to the warm, lovable individual beneath.

You couldn’t ask for a better companion for a tour of our capital than Mr Chicken. He has already explored Paris, and made it his own, but it’s clear that his heart, and the author’s, belongs to London. The city’s sights and landmarks are beautifully represented here, from Piccadilly Circus to St James’s Park. Each spread is a small masterpiece, full of atmosphere and movement. And in the middle of each, a vivid block of yellow, is Mr Chicken, one moment gazing solemnly out of the front of the 139 bus en route to Waterloo, the next filling an entire pod on the London Eye. It’s ridiculous, very funny, and touching, all at the same time. Despite his VIP pass (he has tea with the Queen you know), Mr Chicken wants to blend in, like an ordinary Londoner. And he does, no matter where he goes, or what he does. Whether he’s strolling down the Strand or travelling up the escalator from the Central Line, the crowds around him don’t bat an eye: he’s one of them. Only Nelson looks slightly askance when Mr Chicken shares his column.

Hobbs has named Searle and Bemelmans as influences, and there are echoes of both here, high praise indeed. Absurd and delightful, this is a wonderful book to share with children, who will love Mr Chicken and his adventures, but worth pressing on everyone else too.