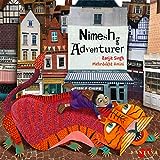 Debut author Ranjit Singh recognises the powerful imaginations that most young children have while at the same time acknowledging that sadly, most adults seem to lose that facility and so the unnamed, unseen individual who accompanies the child protagonist on his journey sees only ordinary everyday things.

That young Nimesh has a fertile imagination is evident from the start of this story. When we first meet the boy he’s about to bid his friends farewell, leave his classroom, or rather not his classroom but an ancient cave so he tells us, and walk home from school. It’s a walk that takes him past a slumbering dragon, down a corridor that becomes a shark-filled ocean and then out through the door and into the road.

Even there Nimesh’s imaginings are still in full flow: crossing the road leads to a sleigh ride over frozen ground to the North Pole which somehow manages to terminate at the palace of a maharajah guarded by an acrobatic chowkidar.

Thereafter the pastry shop morphs into a pirate ship, and in the park he finds a princess.

Finally, as he reaches his front door, Nimesh’s inquisitor appears to have fallen in step with his flights of fancy asking, ‘Is it a cave full of gold? Or an emperor’s castle?’ But now, the table are turned, ‘This is home.’ he states as his parents greet him fondly.

Nimesh’s creative ideas are seemingly triggered by cues in Mehrdokht Amini’s arresting, richly detailed illustrations, which make use of photomontage and collage as well as paint and crayon. Thus, the North Pole dog sledge is inspired by a woman walking a trio of dogs past a ski shop and the pirate ship is conjured up from a cake displayed in a pastry shop window. This is surely a book to help unleash imaginative thinking in its readers.