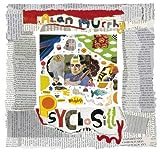 Alan Murphy is a collage artist as well as a poet and self-publisher. Most of the 32 poems in this collection from Ireland might be seen as word collages. Murphy is not much interested here in linear narratives and only sometimes in rhythm. He is interested in rhyme – and often cheerfully reaches quite hard for one. He is definitely interested in mucking about with words, arranging them within his verses and pages in surprising, even whimsical ways, echoed by the colourful visual collages which accompany each poem.

I am not entirely sure how interested he is in children as readers. If you use as the epigraph in a book for children Henri Bergson’s observation, ‘Intelligence is characterised by a natural incomprehension of life’, you do invite speculation about who the intended reader might be. Mr Murphy’s bio-note talks of him giving ‘many public readings of his poems’ and maybe he is chiefly concerned with children as listeners. To make the most of his playful language, you might do well to read them aloud to a class – and leave it at that; or ask them to play with a poem in a pair or group before sharing a reading with others. These are verses to be experienced rather than analysed – the language needs tasting on the tongue. Perhaps they are also not for use as starting points for young writers, since the wackiness, the to-hell-with-logic-winsomeness might well invite mere imitation rather than originality and invention.

An attempt to give an account of these extremely various verses is impossible, so I’ll offer a selection of titles to give the flavour of the whole: ‘In Praise Of Buttocks’, ‘Step Out Of Your Skin’, ‘Buttons And Puddles And Mud And Chairs’ and ‘The Pig And The Parasol’. And a couple of examples of opening lines:

Rhyme is the reason that hot air balloons

Have you ever seen a vampire playing golf?

Or a ghoul from a sarcophagus called Rolf?

Have you ever drank a cup of cyanide

With a tasty chocolate biscuit on the side?

Lear and Carroll maintained a kind of inner logic in their Nonsense Verses. Sometimes Mr Murphy does; and sometimes he don’t.