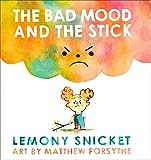 The Bad Mood and the Stick

Young Curly is two hours into a bad mood and it’s all on account of missing out on an ice cream. She chooses to take it out on her little brother Matt by means of a stick she finds on the ground as she walks along with her mum and small sibling. Her mum chastises her, telling her to get rid of the stick which Curly tosses away and with it goes her bad mood. That however is now resting with her mother.

And the stick? That has been found by a racoon, but the creature plus stick manages to alarm old Lou causing him to trip and plop right into a muddy puddle. Curly’s mum finds this hilarious and thus her bad mood shifts right on to Lou.  He takes himself off to the dry cleaners forthwith where, despite protestations from proprietor Mrs Durham, he strips off to his undies to wait while she deals with his muddy dungarees.

Surprisingly the bad mood misses her thanks to Lou’s appearance, and goes off down the road. The stick meanwhile has become the carrier of cheer. On its next appearance it is colourfully adorned with a cocoon that, discovered by one, Bert, has become an exhibit in his ice cream shop window. The very shop window outside which Curly’s mum stops, attracted by the window display and then it’s a case of ice creams all round. Bert too pops into the ice cream shop, sporting his now clean dungarees, and his purchase leads in time to a surprise wedding with the entire cast of characters – human and animal – in attendance.

And what of the bad mood and the stick? The former has done a trip around the world and the latter has stayed put, though not exactly as it was for we all know what happens when a cocoon opens …

Snicket’s deliciously off beat tale twists and turns in unexpected ways – it’s a veritable concatenation of surprises. For Matt Forsythe’s retro-style illustrations he uses a colour palette that gives the impression one is peering into one of those ice-cream parlour counter displays filled with delectable open containers of ice creams of various alluring hues. And, he’s imbued the whole story with a prevailing sense of community that not even the bad mood could dissipate.

Look, there’s a Tractor! The Eye of the North
Scroll to top