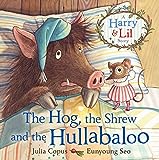 The Hog, the Shrew and the Hullabaloo

First there was Donaldson and Scheffler, now there is now another partnership that, if this gem of a book from poet Julia Copus and illustrator Eunyoung Seo is anything to go by, works with equal skill and apparent consummate ease to produce truly wonderful, memorable picture books. One hates to make comparisons so maybe drawing a parallel is preferable here.

This is the second story to feature hog, Harry and his best friend, Lil, a shrew. Harry is fast asleep when he is awoken by a strange sound outside his window – a scratch-scrump-crunch-skiffle-skreeeee-kazoo no less. A frightened Harry calls up Candy Stripe Lil who, being such a good pal, rushes straight to his aid.

The two spend the whole night trying to ascertain what it is that has so disturbed – and indeed continues to disturb – Harry; but it isn’t Badger out there dining on “a beetle or two and a sip of slug slime.” Oh no; it’s something much scarier, declares the hog. Nor is it the barn owl that has stopped to perch on the branch of the silver birch; something much wilder, declares Harry.

‘So back they went through the not-quite-light,/through the in-between of day and night.’ There’s a taster of the lyrical language employed by the author.

Then comes a third sound, a “Kraaak!” this time, but it proves to be merely Frog serenading his true love not the fierce creature of Harry’s hearing.Just as morning light comes over the hill, all is finally revealed and then it’s time at last for a well-earned sleep for Harry (‘ZZZ’) and Lil – well maybe not for Lil.

The soft, subtle colours and the shades of twilight and moonlight of Seo’s illustrations give an added air of mystery to the tale without spilling over into true scariness.