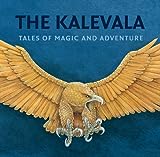 The Kalevala: Tales of Magic and Adventure

The Kalevala is the national epic of Finland, based on oral traditions collected in the 19th century from remote areas of Karelia by the patriotic philologist Elias Lonnrot. The long poem opens with the emergence of the world from oceanic chaos, in which Ilamatar the celestial virgin is impregnated by the sea-wind, and after seven centuries gives birth to Vaiainamoinen, the shaman-hero. Thereafter, the stories evolve in recursive cycles involving struggles between Kalevala, the ancient land of the Finns, and Pohjohla the chill, enchanted Northland. These often concern the forging and ownership of Sampo, a supernatural mill that can grind out flour, salt and gold, but to generalise thus is to belie the complexity of a saga involving tides of creation, destruction and rebirth.

The Kalevala has been influential. Sibelius lovers will be familiar with the strange and sorrowful passions of Kullervo and Lemminkainen, with the eerie bleakness of Tapiola’s forests, and of Tuonela, the Land of Death. Those familiar with the Song of Hiawatha will recognise the throbbing rhythms which Longfellow borrowed from the epic. Readers of fantasy will recall themes adopted by Tolkien and Moorcock. However, this is one of the few editions presenting a selection of the stories in English for younger readers. It is a beautifully produced large format hardback, strongly made and magnificently illustrated. Natural motifs are depicted in intricate black and white line drawings, while the big events occupy dramatic panoramic spreads in which the hues of northern forests and waters are haunted by fire, gold and the glowing bodies of mythical animals. On other pages, close-up or soft-focus depictions of natural scenes and surfaces resemble abstract canvases. The text, granted ample white space amongst all of this variegation, consists mainly of prose, but with frequent extracts of runic verse in drum-like troachaic tetrameters.

The book might be a bit much for some people. The stories, involving seething relationships between people, spirits, animals, plants, minerals and landscapes, are complex, and sometimes lack the neatness of structure and closure that younger readers might have come to expect from more domesticated fiction. Nevertheless, this is a wonderful achievement as both a literary and a physical object. If, as the Iraqi proverb asserts, a book is a garden you can carry in your pocket, this edition of the Kalevala is an entire mythic wilderness you can carry in a satchel to share with your friends.