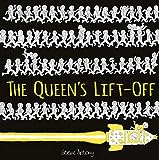 Little does her royal highness anticipate as she helps the little prince and princess build a large toy rocket that, thanks to a playful bouncy corgi pup, she’s about to be launched skywards; but that is exactly what happens.

Before you can say ‘space helmet’ which fortunately the Queen already has firmly in place at she teeters atop a stepladder adding the finishing touches to their craft, she is blasted off into space, clinging on for dear life.

Whoosh! She zooms faster than the speed of light, first towards and around Mercury and then, comet-like on to Venus before the strategic pressing of a button sends here heading down towards the Moon.

Thereon she, together with her ever-increasing band of suitably clad young subjects land and step or otherwise cavort across the surface before taking a single giant leap to Mars and then, having spun rings around Saturn, the astronauts continue their voyage past the other planets in our solar system until, catastrophe! Her majesty is quite suddenly sucked right into a black hole.

Is it her fate to be trapped forever inside, held by its gravitational force?

Happily not, for a passing spaceship comes to her aid, beaming her up and then right back down from whence she came, depositing her all in one piece, safely in the palace garden where afternoon tea awaits.

I love the way Steve Antony has dropped references to Star Trek and Neil Armstrong’s first moon landing into his verbal narrative. While this seems relatively simple, there’s a wealth of additional visual stories to discover. Look out all the way through for the little alien and his flying saucer, who after performing some pretty amazing tricks with a tea tray and its accoutrements, has the final word.

An un-missable addition to this series. JB

Pencil Dog Sonam and the Silence
Scroll to top