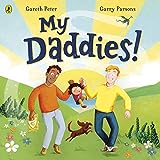 Gareth Peter started writing stories when his children arrived, and he brings his own experience of being a stay-at-home dad in a same-sex partnership with two adopted sons to this delightful rhyming story of two daddies and their little girl, who is not named.

Garry Parson’s illustrations show them playing, and then reading stories, and that’s when the exciting journeys start in their imaginations.  With their little brown dog, they battle dragons (in armour) and find treasure, hunt for dinosaurs in a primordial swamp (when they’re feeling brave); they go to the Moon, and find secret islands.

However, ‘Books take us on these journeys, over forest, sand and sea, but my daddies’ favourite story is the one that brought them me’ and we see the baby pictures, then the toddler, cuddles with two grannies of different ethnicities, and the girl’s drawings of them, lovingly kept. As friends turn up at the door she says, ‘Some people have two mummies, and some, a mum and dad, but I have SUPER daddies, who chose me…I’m so glad’ and these various families all have a meal together. The daddies are not the best at everything, which gives Garry scope for more fun with his illustrations, but she doesn’t care. To her they are ‘the world’s best King and King’, and here they are shown with one dressed as a medieval king and the other as a Rajah, but the other way round from what you might expect from their ethnicity, ‘and storytime with them will always be my favourite thing’.

This is a lovely book, full of the joys of parenthood, but your reviewer particularly enjoyed the final illustration of the dog with its lead in its mouth, looking hopelessly at the two exhausted daddies who have gone to sleep on the sofa…

Where is the Dragon? Milly Cow Gives Milk
Scroll to top